There have been many famous TV living rooms where we have watched our favourite characters grow up, share life lessons and make us laugh.  Here are The Wooden Furniture Store's top five iconic TV living rooms.

Only Fools and Horses 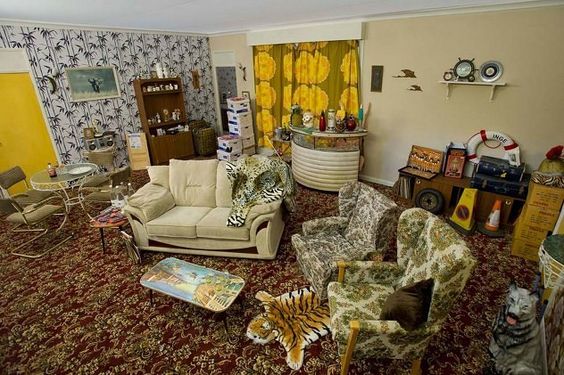 Only Fools and Horses is Britain's best loved sitcom.  It ran for seven series, producing 64 episodes and seven Christmas specials, one of which (Time On Our Hands) set an all time British sitcom ratings record of 24.3 million viewers - around a third of the population.  Set in Peckham in South-East London, it starred David Jason as ambitious market trader, Derek "Del Boy" Trotter and Nicholas Lyndhurst, as his younger brother Rodney and follows their highs and lows in their attempts to get rich.

Their council flat was situated in Nelson Mandela House and was furnished with the finest of 1980's interior design, featuring an eye popping combination of retro patterns and lurid colours.  The height of sophistication was Del Boys bar where he enjoyed a "lovely-jubbly" Pina Colada and where he kept his beloved lion cigar jar and his candlestick telephone.    The red pub style carpet clashes beautifully with the miss match of chairs, the faux fur lion skin rug and bamboo print wall paper.  The flat is also home to surplus market stock - glass of Peckham Spring anyone? 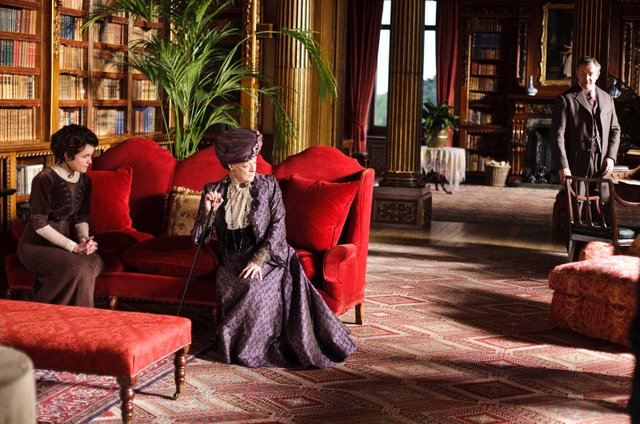 Downton Abbey, the award wining series from Julian Fellowes, spans thirteen years of gripping drama centered on a Yorkshire country estate between 1912 and 1925.  The six series follows the aristocratic Crawley family and their domestic servants through sweeping historical change, scandals, love, ambition and heartbreak. The pivotal location for the filming of Downton Abbey is Highclere Castle and its Edwardian sitting room, is one of England's finest.  The room is grandly decorated from it's high ceilings to it's rich pigmented colour scheme and beautiful heritage prints.  The regal red furniture and colonial inspired ornaments oozes opulence and wealth.  The light pours in through the huge windows onto the mahogany furniture, dramatic portraits and walls lined with books.  Downton's formal sitting room is certainly a one of kind.

The Simpsons is an American animated sitcom created by Matt Groening, which has been running since 1989 and has had over 615 episodes since it first aired on our screens.  The series depicts the life of the Simpson family which consists of Homer, Marge, Bart, Lisa and Maggie.  It is set in the fictional town of Springfield and parodies American culture and society.

During every opening credit, the Simpsons family hurry to their living room, sit down and watch television together.  The simple brown sofa, originally belonged to their next door neighbour, Ned Flanders, who dumped it on the pavement.  It was ‘liberated’ by Homer Simpson, and now resides in their living room. Since then, it’s been home to fights, feuds, living room Olympics, and zombie attacks – not to mention the eponymous couch gags at the start of each episode.  A simple painting of a boat hangs on the wall above the couch which Marge painted for Homer and is a scene from Moby Dick.  The sparsely decorated living room is completed with a purple telephone table and matching lamp. The fictional flat at 221B Baker Street is a strangely stylish bachelor pad and mixes vintage classics, with more modern pieces.  For example, a beautiful La Corbusier chair is flanked by an IKEA Samtid reading lamp.   The rest of the furniture is mostly mahogany and includes bookcases and an occasional table and to add to the cozy feel, there's another armchair plus striking red carpet.  The prominent wallpaper (seen in the mirrors reflection) is a luxurious dark chocolate Fleur De Lis motif within a trellis pattern and a worn leather sofa which sits in front.  We love the attention to detail in the room, the tiny pictures, the maps and sheet music covering every surface and even the selection of vintage gun magazines.

Sex in the City Sex in the City is an American romantic comedy TV series, created by Darren Star which ran from 1998 to 2004, spawned two feature films and was based on the books by Candace Bushnell.  Set and filmed in New York City, the show follows the lives of four women - Sarah Jessica Parker (Carrie Bradshaw), Kim Catrall (Samatha Jones), Kristin Davis (Charlotte York) and Cynthia Nixon (Miranda Hobbes) and tackled relevant and modern social issues such as promiscuity and femininity.

Although not strictly a living room, who wouldn't want Carrie's Upper East Side studio? It's cozy, chic and has an amazing closet!  The muted grey and beige living room is highlighted with a lick of cobalt paint and a relaxed arrangements of picture frames over the bed.  Carrie knows that there's no better place to sit and type that by the window, so her desk is flooded with natural light.  The studio is an interesting mix of new pieces and vintage finds and includes a high impact aubergine and cream overleaf rug.  It's a great looking studio with a real sense of soul and personality.

So, this is just our choice, which iconic TV living rooms would you add to the list?