We get so much inspiration about interiors from TV shows, so we thought we'd write a post about our favourite ones.  Even if there is an excellent script, we can't help but notice the ambience of the room, the styling of the shelves or the colour of the wall.   We thought we'd look at six of the best home offices on TV.  Here's to some serious desk envy! Some of the most astounding TV interiors recently, are from The Handmaid’s Tale, an adaptation of Margaret Atwood’s iconic novel featuring Elisabeth Moss and Joseph Fiennes.  In the first episode Offred, says of her new home with Commander Waterford and his wife, “In this house, little things mean everything.”  In fact, Offred’s observation is also an apt description of the production itself - hidden within the rooms of the Waterford home and the world of Gilead (a fictional totalitarian regime within the Northeast United States) are tiny details that add meaning to the dystopian story.

The Commander’s private study, a dimly lit library of books and artifacts that stands apart in a world barren of information.  It’s a showcase of the Commander’s power.  The space was created to have a classic, almost gentleman's club air, using lighting and objects to create something akin to the Harvard library, an elite space in Gilead filled with knowledge.  The production team wanted the study to encompass everything forbidden to women - books, art, magazines and alcohol.  The amount of books leaves Offred (as a former book editor, who hasn't read for five years), wide-eyed! 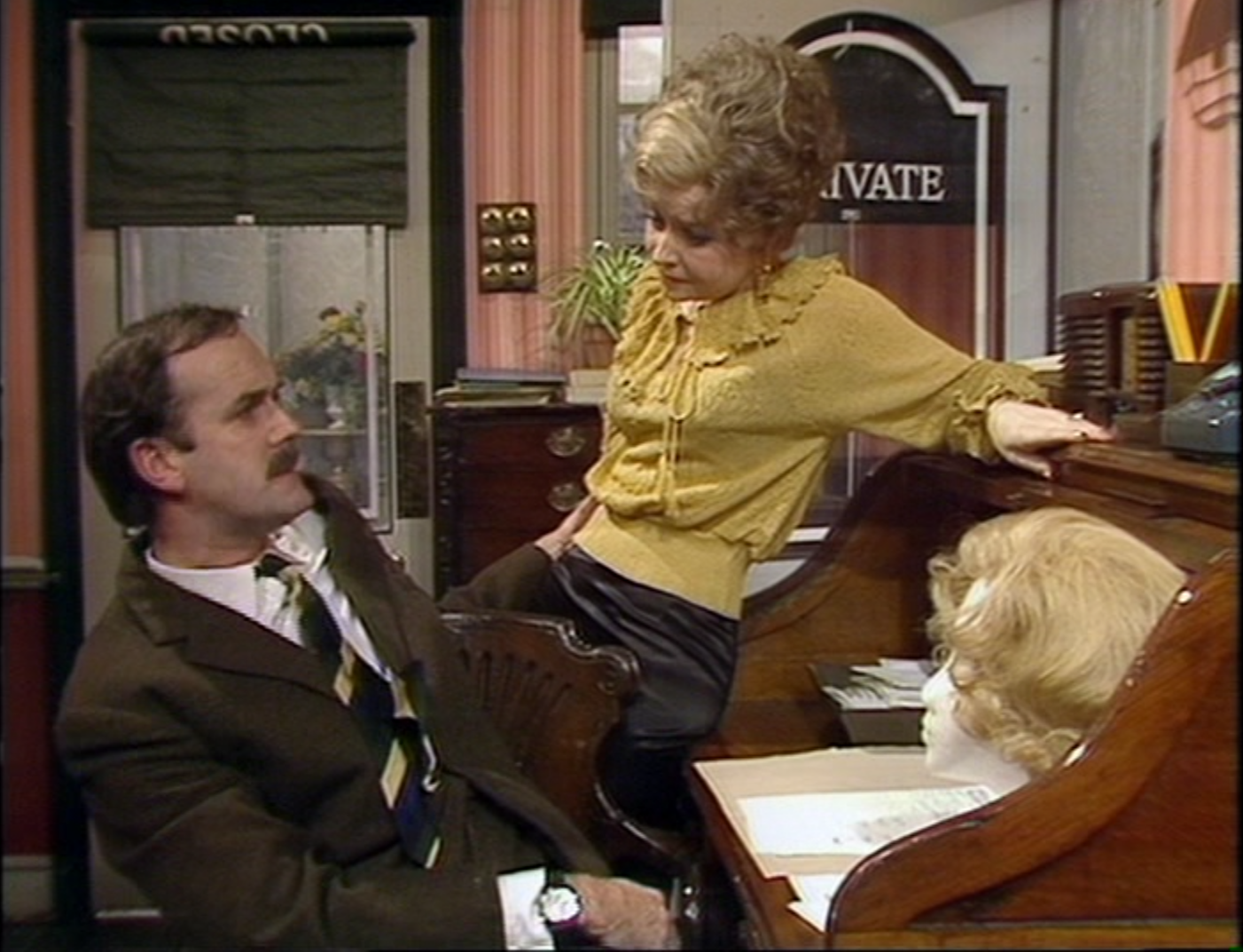 It was while filming for Monty Python's Flying Circus in 1971 that John Cleese and the rest of the team chanced to stay at the Gleneagles hotel in Torquay, Devon. The visit inspired Cleese to create the classic 1970s sitcom Fawlty Towers.  The ailing establishment was run by a man who was completely inappropriate for hotel management. Snobbish, angry, frustrated and totally untrusting, Basil Fawlty lacked everything, especially a gentle demeanour and sensitivity towards his guests.  His nemesis was his formidable and domineering wife Sybil who - despite Basil's best efforts - cracked the whip at the hotel.  Basil was totally under her thumb which ensured accidents and trouble were never far away.

Many of the TV sitcoms best loved scenes take places in the big hotel lobby, where hotel staff can take cover from irate guests behind the counter.  In the corner, is the hotel’s private office with a classic 70's feel - an antique, mahogany roll top desk, a safe and filing cabinets.  During busy check-in sessions or meal times, while everyone else is busy working, Sybil is frequently found in the office talking on the phone to one of her friends repeating the phrase "Oohhh, I knoooooooow". 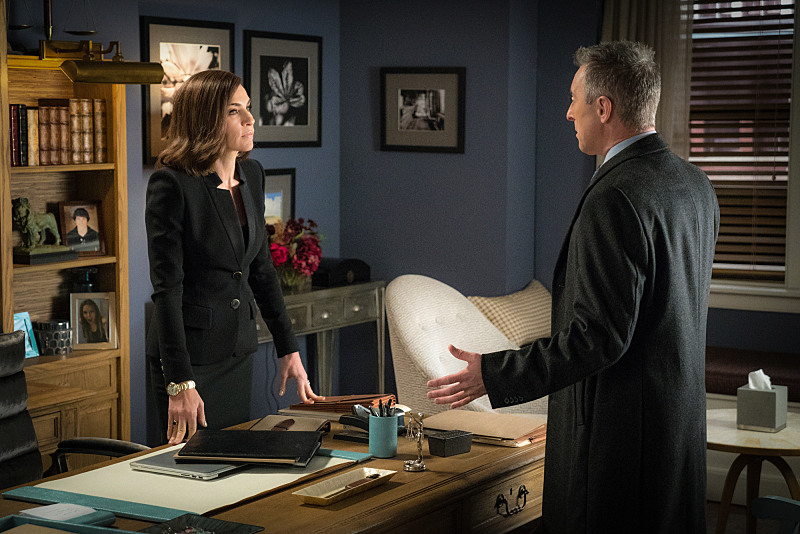 After seven series, The Good Wife shown on More4 in the UK ended in 2016.  As we begrudgingly had to bid farewell to one of the best legal and political dramas on TV (ever!), we also had to say goodbye to the iconic interiors too.  The series focuses on Alicia Florrick (Julianna Margulies), whose husband Peter (Chris Noth), the former State Attorney for Illinois was jailed following a notorious political corruption scandal.  Having spent the previous 13 years as a stay-at-home mother, Alicia returns to work as a litigator.  Her ultra-stylish, traditional Chicago apartment achieves both a lived-in and polished look that we have been lusting over since episode one.  While Alicia’s built-in bookshelves, hardwood floors and beautiful kitchen may not be achievable in every home, her converted home office certainly is.

At the start of series seven, Alicia literally cleans out her son's old bedroom to convert it into her new home office.  The stylish writing desk has clean lines which is complemented by its sculptural profile and tall tapered legs.   Beth Kushnick the set designer was mindful that the character’s world at home is devoted to her children and their comfort, so she kept the style casual with classic neutral colors.  Although the look of the set is high end, it's extremely accessible and there's an incredible amount of detail into every room that's seen.  For instance, the drawers are always filled with actual clothes and the refrigerators stocked with real food.  A photo of Julianna Margulies real grandmother was put in a frame and placed on Alicia's desk - she was one of the first to graduate NYU Law School in 1924.  This attention to the smallest of things allowed viewers to feel like they’re looking at rooms that could be found in their own home. Sex and the City was set and filmed in New York City and based on the 1997 book by Candace Bushell, the show (if you've never watched it!) follows the lives of a group of four women who despite their different natures and ever changing lives, remain inseparable to each other.  Staring Sarah Jessica Parker (as Carrie Bradshaw), Kim Catrall (as Samantha Jones), Kristin Davis (as Charlotte York) and Cynthia Nixon (as Miranda Hobbs).  The TV series ran for 94 episodes and spawned two films.

We love her skyscraper heels, her cooky outfits and in the end Mr Big (but Aidan will always have a place in our heart) but what we envy is most about Carrie Bradshaw is her querky studio apartment which was redesigned for the film.  The bright blue walls are set off by pieces of modern, minimalist white furniture, such as Carrie’s writing desk. “It’s all about the desk. If I find the desk the writing will come,” says Carrie in the movie.  Take it from a us, there’s no better place to sit and type than by a window.  Natural light flooding in is the best source of inspiration you’ll ever have.  Carrie’s pad was drowning in lamps and by ditching the overhead lighting, it's a great way for setting the mood in a room.  Mixing new pieces with vintage finds adds interest too. 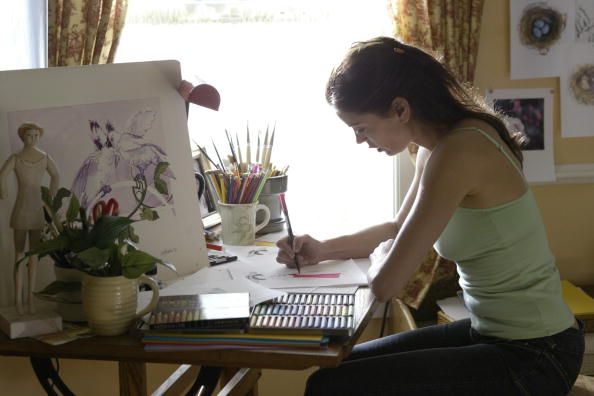 Set on Wisteria Lane, in the fictional town of Fairview, Desperate Housewives, followed the lives of a group of women as seen through the eyes of their late friend and neighbour who committed suicide in the pilot episode.  The series featured Teri Hatcher (as Susan Mayer), Felicity Huffman (as Lynette Scavo), Marcia Cross (as Bree Van de Kamp) and Eva Longoria (as Gabrielle Solis).

The set for Wisteria Lane is located on the Universal Studios Hollywood back lot.  It is referred to as Colonial Street, and actually has been used for several movies and TV shows since the mid 1940s such as The Munsters, Gremlins, Psycho and Buffy the Vampire Slayer.  Who didn't felt a little jealous of the immaculate homes on Wisteria Lane?  Set designers on Desperate Housewives clearly had fun showcasing each character’s distinct style in their homes.  Susan Mayer was a writer and illustrator of children's books and her home featured bright, crisp colors with whites and yellows that symbolised her recently divorced status and fresh start. The eclectic collection of mismatched, country-inspired furniture reflects her quirky character - specially in her studio.  Her antique drawing studio desk was surrounded by framed artwork from her book illustrations and sketches. 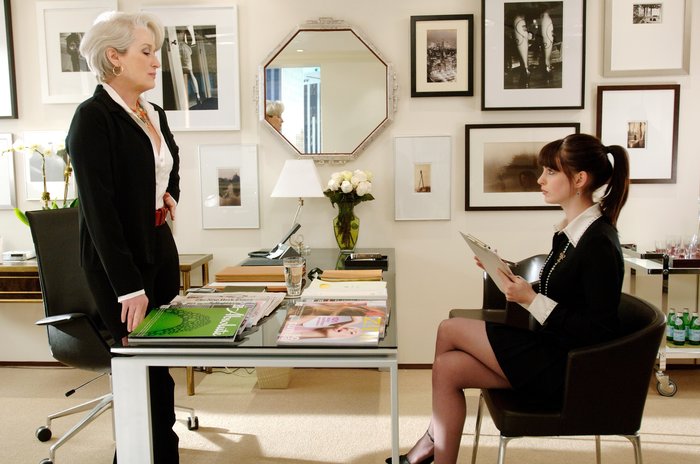 OK we know - it's not TV but we had to include The Devil Wear's Prada in our top six list.  The film is based on Lauren Weisberger's novel and stars Meryl Streep as Miranda Priestly, a powerful magazine editor and Anne Hathaway  as Andy, a college graduate who goes to New York and lands a job as Priestly's co-assistant.

Jess Gonchor, the production designer, has done a fabulous job with Miranda Priestly's office.  He toured the offices of some real fashion magazines and gave the movie’s Runway offices – “a clean, white look meant to suggest a makeup compact”,  Gonchor has successfully taken Miranda’s characteristics and made the space around her fully reflect her personality. One of the industry’s most accomplished set decorator’s Lydia Marks was tasked with curating the interior furnishings and décor.  Miranda's office is minimalist, yet chic, sleek and efficient yet feminine. The colour scheme is black and white with one entire feature wall of framed photographs. (In fact interiors magazine Elle Decor said Miranda Priestley’s office "features one of the most perfect gallery walls we’ve ever seen”).  Miranda’s office chair is the Bird Chair by Preben Fabricius & Jørgen Kastholm Chair in black leather.  The metal desk, is infact a dining table and console table with its combination of brass and wood, creates another element of warmth in the room.

Interestingly, Miranda’s office bears a very strong resemblance to that of Anna Wintour’s, the real-life editor of US Vogue magazine, down to the octagonal mirror on the wall! In fact, Anna Wintour had her own office remodelled following the movie’s release!

So, this is just our choice.  Which iconic TV home offices would you add to the list?